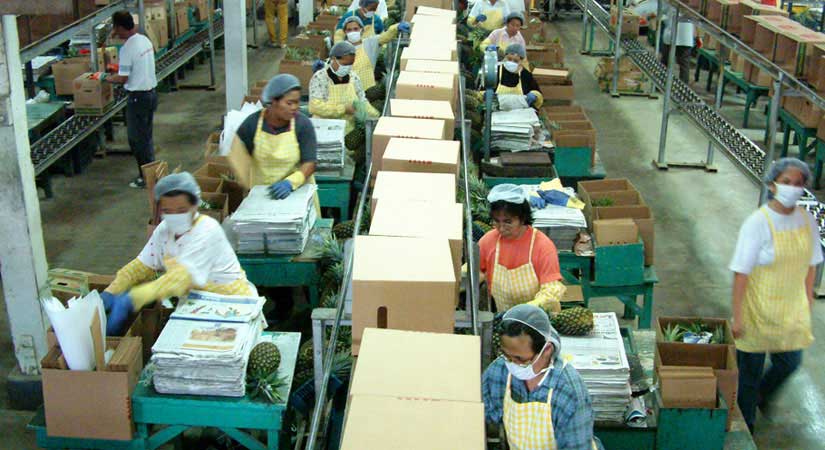 FACTORY OUTPUT extended its losing streak to a fifth month in July, with an 11.9% year-on-year decline in the Volume of Production Index (VoPI), the Philippine Statistics Authority (PSA) said Friday.

The PSA was reporting preliminary VoPI results, which form part of the PSA’s Monthly Integrated Survey of Selected Industries.

The decline was less than the revised 12.5% drop recorded in June, but deeper than the year-earlier decline of 8.5%.

In the seven months to June, the decline in factory output averaged 12%, compared with the 8.8% drop in the year-earlier data.

In a statement, the PSA said the VoPI’s July performance departed from the June trend due to a 400% increase in the index tracking the petroleum products industry group in July, after it posted a gain of 16.1% in June. Also posting gains were two other industries – wood and wood products at 14.4% (from 19.9%) and chemical products 0.1% (from 6.3%).

In a statement, the National Economic and Development Authority (NEDA) said the July reading marked a third straight month of reduced rates of decline.

“While manufacturing is not yet in positive territory, the trends of the volume and value of production in the last three months indicate an improvement in the trajectory of economic activity. This momentum suggests a gradual recovery of demand in the coming months until the end of the year,” Acting Socioeconomic Planning Secretary Karl Kendrick T. Chua was quoted as saying in the NEDA statement.

NEDA expects factory output “to remain subdued in the near-term as businesses expect the pandemic to have a lingering impact on production.”

Sergio R. Ortiz-Luis, Jr., president of the Philippine Exporters Confederation, Inc. (Philexport), said the slower decline in July is “not a surprise” because of the easing in lockdown restrictions. “Hopefully by the end of the year, more jobs would be opened and transportation, such as buses, will be operational,” he said in a phone interview.

Rajiv Biswas, Asia Pacific chief economist of IHS Markit, said the near-term outlook for manufacturing is “likely to be weak,” noting that Metro Manila and the surrounding provinces have been moving in and out of stricter quarantine regimes.

“The IHS Markit Philippines Manufacturing Purchasing Managers Index (PMI) for August showed that new work inflows contracted sharply in August as movement was further restricted, while some sectors were forced to operate at reduced capacity,” Mr. Biswas said in an e-mail.

“According to the survey, a net positive number of businesses expected an increase in output over the coming year. However, business confidence on the outlook remained subdued, reflecting the uncertainty of the path of the pandemic and lockdown measures,” he added.

The Philippine manufacturing PMI of 47.3 in August was lower than the 48.4 reading in July and 49.7 in June.

A PMI reading above 50 indicates an expansion in activity; below 50 signals a contraction.

Mr. Biswas said while IHS Markit expects the Philippine economy to rebound next year, the pace and timing of the recovery remains dependent on the regulatory approval of a coronavirus vaccine and the rollout of immunization programs. — Ana Olivia A. Tirona